How to become an active rider

How to become an active rider

RadGrandad Something To Think About No Comments

In a recent article I asked the question ‘Are You an Active or Passive Rider?’ and you will probably have some thoughts about your answer.

The concept of active riding is not often considered but it is one of those foundations to off-road riding alongside Core Skills. If you come from a road riding background or you have just started riding, the idea of being active around the bike rather than on the bike can be a little alien.

I’ve highlighted two words – ‘around’ and ‘on’ in the previous sentence to focus on the difference between activity and passivity while riding. Keep those two words in mind as you absorb the following benefits of being active around the bike.

Riding on a bike 👎

Specifically, I’m talking about riding a bike seated on the saddle.

On smooth surfaces this is not an issue unless you’re taking your riding to the next level and slaying an alpine descent or powering up the next monster climb!

Normally, the inputs from a bike on a smooth surface are minimal and easily counteracted. Although, there can be circumstances where the experience can be a little unnerving, for example, riding over a pothole!

Inputs from the bike are felt through the contact points of handlebars, pedals and saddle. Let’s think about each contact point in turn.

Hands on the handlebars, whatever their position on the bars, rarely support any body weight when the rider is seated. Therefore, control of the handlebars requires little effort from the rider and the input through the bike to the rider is minimal on a smooth surface.

As the surface becomes less smooth the inputs through the bike to the handlebars become more pronounced but rarely are these inputs so violent that the rider has to counteract those inputs.

Feet on pedals will support a portion of your body weight but on smooth surfaces they’re the contact for transmitting power through to the drive train and ultimately the rear wheel.

Inputs through the bike from the surface when seated are minimal in terms of disruption to the rider’s control of the bike.

95% of the time when riding, your entire body weight is supported through the saddle and as such becomes a pivot point when considering bike and rider as one. In addition, the centre of gravity of the combined mass is at that pivot point.

Small inputs from the riding surface are significant through the saddle and any violent inputs will disrupt control, balance and grip to a significant degree becoming, potentially, catastrophic.

Riding around the bike 👍

Of course, there are many times when you have to ride seated but there are also many occasions when you can reduce the inputs from the riding surface by riding unseated.

When riding out of the saddle, handlebars become one of just two contact points between rider and machine. Their importance for directional control is, of course, paramount although additional directional inputs are possible using body movements.

As riding surfaces become less smooth and more challenging, the need to become more aggressive with inputs rises. The result is we need to ensure that our ‘cockpit’ (handlebars, gear levers, brake levers, dropper post control, etc) become hugely important in helping to control the bike not just in terms of direction but also aiding stability.

The pedals become the significant point of contact When riding out of the saddle, especially downhill. The pedals and cranks become a stable platform, not just for our feet, but for our whole body.

When climbing, a shorter crank length becomes especially important to conquer technical climbs where we must manoeuvre the bike over rocks, steps and other surfaces.

Plus, transferring the platform for balance and control from the saddle to the pedals and cranks lowers the centre of gravity which is a huge bonus when negotiating difficult trail surfaces and features in downhill sections.

Climbing hills in the saddle is inevitable but descents while seated are often disastrous partly due to the raised centre of gravity and partly because the saddle position on the frame is only suitable while riding uphill or the flat. Riding downhill on rough surfaces requires the rider to move back on the bike to maintain longitudinal balance and lightness on the handlebars.

An Active Rider has a stable torso.

By using handlebars and a stable platform of pedals and cranks as contact points, the bike has freedom of movement underneath the rider. Arms and legs act as shock absorbers and flex to allow the torso to remain stable which enables speed and control.

A Passive Rider has an unstable torso which encourages a lack of control of speed and direction. Plus, as the bike receives inputs from the trail surface and features, those inputs are immediately transferred to the rider causing instability to be compounded rather than allowing the arms and legs to absorb those inputs. 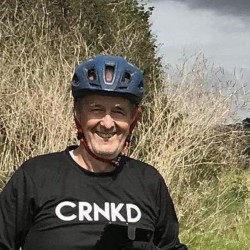 RadGrandad
Jez Meades aka. RadGrandad has been riding bikes for more than 25 years. From time-trialling to racing cyclosportives in Europe to just having fun on an MTB. A British Cycling Level 2 Cycling Coach happy to share his knowledge and experience.

Latest posts by RadGrandad (see all)

Jez Meades aka. RadGrandad has been riding bikes for more than 25 years. From time-trialling to racing cyclosportives in Europe to just having fun on an MTB. A British Cycling Level 2 Cycling Coach happy to share his knowledge and experience.